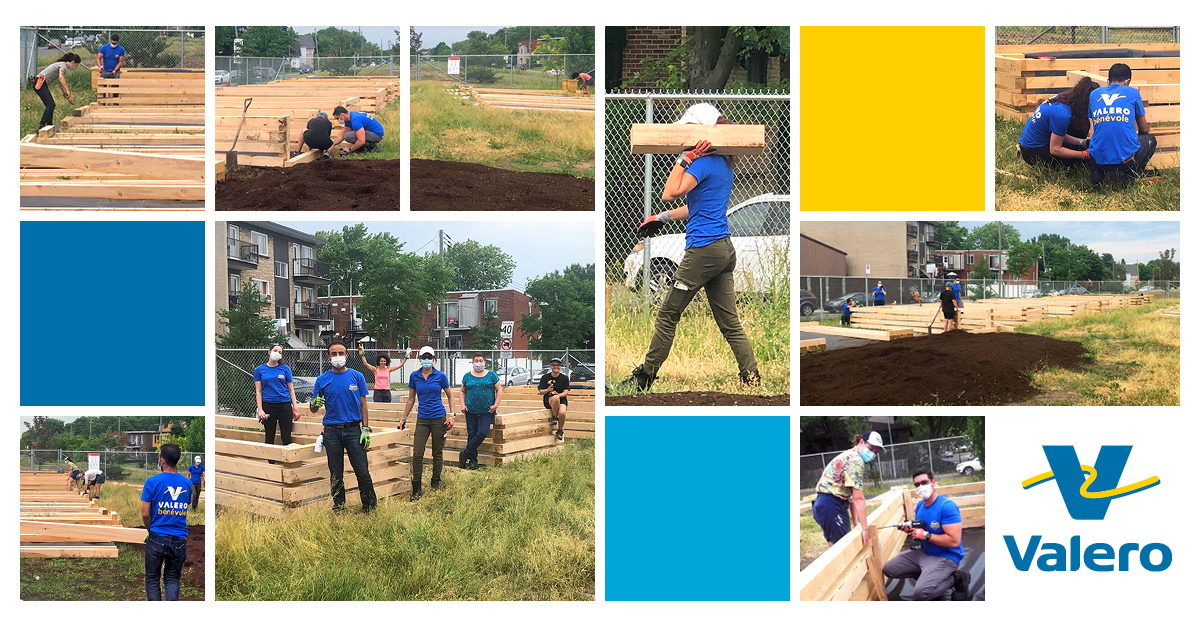 Last Friday, a team of employees at the Montreal-East Terminal took their Friday afternoon to help build around 10 bins that will be used to grow fruits and vegetables at the Montreal East Collective Gardens. It is an urban agriculture project that has been coordinated by the Réseau alimentaire de l’est de Montréal and supported by Valero Energy since its inception in 2018. With the third season right around the corner, the collective gardens now have three times more space, which will mean more harvests largely earmarked for food basket recipients of Action secours-Vie d’espoir, an organization located right across the street!

This year, the space allocated to the collective gardens tripled from 400 to 1200 square metres. Sprouts will now be grown in bins that are larger and deeper instead of in canvas bags.  Plans are to grow cucurbits, lettuce, greens, cabbages and vegetables/fruits from the solanaceae family (tomatoes, aubergines, pimentos, peppers). Also included are okras, onions, broccoli, celery, root vegetables, flowers and fine herbs. This comes as good news to Action secours-Vie d’espoir, which was quite busy during the confinement brought on by the pandemic. The pausing of the Quebec economy resulted in numerous job losses, which meant that food bank organizations faced sudden and sharp increases in requests for assistance at the same time they had to adapt their services to new constraints, thereby driving up operating costs. In early April 2020, Valero donated $15,000 to Action secours-Vie d’espoir to increase food supplies and pay the fuel costs for food deliveries by truck and car.

The Montreal East Collective Gardens was established thanks to a contribution from about ten or so public, private and community partners and the work of a group of committed volunteers. To date, Valero has contributed $150,000 to this initiative by the Réseau alimentaire de l’est de Montréal, which takes a comprehensive approach to the issue of food security, from providing information on the educational aspect of nutrition to making available fresh quality food to residents in eastern Montreal.

Sincere thanks go out to the Valero team for volunteering its time and efforts to bring the Jardins collectifs to the community once again this year!